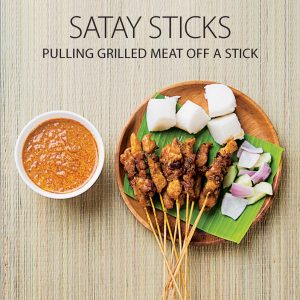 here is nothing more akin with Thai food than satay sticks.

These incredibly tasty sticks of meat are coated in a tangy peanut sauce that almost everyone is familiar with. Grilled on hot charcoal, these small but delicious skewers are enjoyed by everyone from young children to adults
and by people from across the world.

HISTORY
Although exactly where satay originated from is often debated, the most common theory is that it originally came from the Indonesian island of Java. If, as we are led to believe, it did begin life in Java, these simple yet popular meat skewers quickly spread across other areas of Southeast Asia perhaps due to the close proximity of the different islands and different countries. It plays a huge role in Thai cuisine but is also quite heavily influenced by Indonesian and Malaysian tastes.

Satay is believed to be a variation on Middle Eastern kebabs as well as Indian kebabs which are again skewered meats, fish or seafood dishes. It was the textile and spice trade that saw these dishes become influential across Southeast Asia during the 18th and 19th century. At the time, street vendors saw this as an opportunity to earn a living selling satay to the hungry traders.

These days Satay can be found all across the continent with most countries adapting the dish to suit the spices and other ingredients that are available. Indeed, it was recently reported that satay sticks now form part of ‘traditional’ food in Malaysia, Thailand, the Philippines, Singapore, East Timor and Brunei.

SATAY IN THAILAND
It is believed that satay was brought to Thailand or Siam as it was at the time, around the end of the 18th century with traders from Java and the Maluku islands keen to sell their spices in the Kingdom. Naturally, the dish evolved within Thailand. The Siamese added their own influence of marinating meats for a number of hours with the pieces of meat used in satay left in a mixture of coconut milk and turmeric, which results in the delicious taste.

The process of marinating tenderised the meats as well as adding a distinctive flavour. Naturally, the delightful peanut sauce was still included when the meats were barbequed and it is thought that the sauce helps bring out the flavours of the meat itself. These days, many Thais will tell you that satay is best served with a cold beer and very few will argue that this doesn’t bring the flavour out – or perhaps this is just an excuse?

HOW IS SATAY PREPARED AND COOKED?
Satay has many variations having evolved from the original dish. Most countries use spices and ingredients that are commonly used in their own forms of food. The most commonly used meat is chicken although some countries do use pork or fish. Essentially, the main coating is the tangy peanut sauce which is applied just prior to cooking over hot coals. However, in some countries, such as Thailand, it is marinated whilst others prefer to cook the meats fresh.

HOW TO EAT SATAY
Satay is usually eaten straight from the skewer and can be enjoyed at any time of day or night. It can be eaten on its own or with other dishes or salads. Some people like to dip it in other sauces such as ketchup or sweet chilli sauce whilst others prefer the original. The choice is yours and you can just as you please!

WHERE CAN YOU BUY SATAY IN PATTAYA?
In the same manner that you can easily come by Phad Thai, Somtam and Tom Yam, satay can be found being sold on almost every soi in Pattaya. The dish is cheap and healthy and can be enjoyed as a snack or as part of a main meal. Such is the popularity of the dish, it can be found in many restaurants in the city too. This ranges from small Thai restaurants to upmarket venues in 5-star hotels. Quite simply, the dish can be found everywhere and enjoyed by everyone.