A SLICE OF HISTORY – PIZZA THROUGH THE AGES 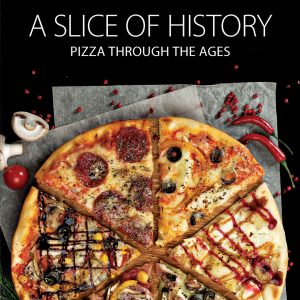 When we think of dishes that are available in almost every country around the world, pizza immediately springs to mind.

The name comes from the Latin word ‘pinsa’ which simply means flatbread, the bread that we most commonly associate with traditional Italian pizzas.

Pizzas date back to Bronze Age and indeed a pizza was found during an archaeological dig in the Veneto region although it appears to have really risen in popularity during the days of the Roman Empire. By the time we had reached the Middle Ages, pizzas were very similar to what we would recognised today. The flatbread was topped with olive oil and herbs. This dish was enjoyed by the peasants but avoided by the aristocracy at the time.

Several years later Indian Water Buffalo were introduced to Italy and pizzas started to have mozzarella cheese topping like you would expect to be served today. The introduction of tomatoes into Italian cooking happened during the 18th century even though they were first known in the country during the 1500’s.

By the turn of the 19th century, pizza had become popular with everyone, not just the peasants. Street vendors and local shops sold pizza that could be customised with your own favourite toppings. The first true pizzeria opened in Naples in 1830 and was known as ‘Antica Pizzeria Port Alba’ and is still going to this day.

The pizza Margherita, the basis of almost every pizza was named after Queen Margherita of Italy who visited the Pizzeria Brandi again in Naples in 1889. The design was based on the Italian flag and made especially for the Queen. The red was the tomatoes, the white the mozzarella and the green was fresh basil. The traditional Neapolitan pizza was now popular throughout Italy.

In the 20th century, an increasing number of different pizzas became available throughout Italy. However, somethings always remained the same, the pizza was round, made to order, and cooked in a traditional wood-fired pizza oven. The first recognised versions were Pizza Capricciosa and Pizza Veronese.

Pizza Quattro Formaggi and Quattro Stagioni were perhaps the first that were available throughout Italy. These days there are literally dozens of different types of pizza and these are almost the same wherever you eat them. You can buy the same pizza in New Zealand as you can in Italy or England. The dishes has become something of a global sensation with many children believing it has always been part of their country’s cuisine.

It was during the 20th century when the American Pizza came to prominence. There were two versions, the Chicago style pizza which is thick with lots of cheese and New York pizza that was far thinner and more in keeping with the traditional Italian version. American Pizza certainly has a place in our minds and our stomachs but it is the traditional Italian pizza that stole our hearts.

Here in Pattaya, pizza is one of the most popular European style dishes and is enjoyed by Thais and foreigners alike. Pizza Company is the leading fast food pizza restauarnt & delivery servicehere in Thailand, followed by international chains like Pizza Hut and Dominos in the city that offer pretty much the same experience as you would get anywhere in the world.

Of the more international style venues, you can enjoy pizza in Central Pattaya at the Sportsman on Soi 13 who offer a pizza and pasta night every Friday for just 249 baht. In East Pattaya, Aroi Pub Resto on Sukhumvit Soi 89 offer a pizza and pasta buffet every Thursday night starting at just 245 baht. In Jomtien, Hemingway’s also has a range of tasty pizzas that can be washed down with a cold beer and is a very family orientated establishment.

In addition to these options, you also have Nick the Pizza who have an excellent range of pizzas that can be delivered direct to your doorstep. When it comes to delivery options Door 2 Door offer home delivery from over 100 restaurants in Pattaya so you are sure to find something that you like without the effort of having to leave your home. These are just a few places to mention, there are many more restaurants in and around Pattaya that offer great pizza.