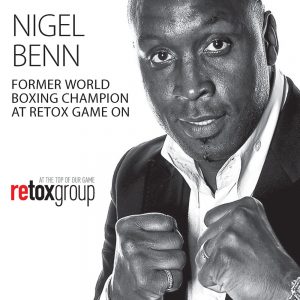 Nigel Benn, aka The Dark Destroyer, was one of the best middleweight boxers of his generation will be in Pattaya.

Fighting at a time when Britain produce a crop of top fighters including Steve Collins, Chris Eubank and Michael Watson, Benn is probably best remembered for his battles with Chris Eubank and Gerald McClellan along with his ‘never say die’ attitude. He had incredible punching power and an aggressive boxing style that always endeared him to fans.

After boxing, Benn became an internationally recognised DJ and became a born-again Christian. Boxing is still very much part of his life and he reguarly mentors amateur boxers in Australia where he now lives. He was inducted into the WBC Boxing Hall of Fame in 2013 and is rightfully recognised as being one of Britain’s greatest boxers.

On Friday 2nd November, The Dark Destroyer will be appearing live at Retox Game On, Soi Honey. As demand has been high, only Silver Package tickets are available at 1,500 Thai Baht and will allow guests to sit in close proximity to the legend himself. Take part in a Q&A session, have your photo taken with Benn, and enjoy the finger food buffet along with a few cold beers.

For those of you who are unfamiliar with the venue. It’s a superb English-style sports pub offering a great selection of western food with Thai options also available. Great selection of draught beers from Stella Artois to Guinness.
The atmosphere is warm and welcoming and for sports fans, there (cont…) are over 50 TV’s showing the live sport from around the world including the English Premier League, AFL, NRL, NFL and so much more.

If you can’t make the Friday night event, Bangkok Brawl 6, will be coming to Pattaya Boxing World located on Sukhumvit Road (next to Mini Siam) on Saturday 3rd November. Benn will be the special guest and boxing judge at the ‘Invading The Pride of Pattaya’, White Collar Boxing event. Early Bird tickets (booked before October 12) will be just 600 Thai Baht and 800 Thai Baht after this date and 1,000 Thai Baht on the door. VIP and Ringside packages are available with doors opening at 6pm.

On the night, there is a once in a lifetime opportunity to have a sparring round with The Dark Destroyer if you feel brave enough. Seriously though, what a great photo that would make, along with the bragging rights that you sparred in the ring with former world champion Nigel Benn. Spaces are limited for this rare opportunity, and the cost is an additional 2500 Thai Baht.

Pattaya Boxing World is Pattaya’s premier boxing venue opened in 2012. It has a maximum capacity of 600 people meaning that it is large enough to have a fantastic atmosphere but small enough that spectators feel at the heart of the action. They host some of the top bouts in Thailand with up to 11 fights per night being staged in the air-conditioned venue. This is predominantly a Muay Thai venue, although as is the case with the Nigel Benn evening, they do stage boxing to the Queensbury rules. If you are a fight fan, it is well worth going along to watch the drama unfold.

For tickets for either event, you can buy directly at Retox Game On, Soi Honey or call Simon 0874 406 060 or email info@retoxpattaya.com

WIN A PAIR OF TICKETS TO PATTAYA BOXING WORLD EVENT
To enter, simply visit www.nigelbenn.pattaya.guide and fill in the form.
The prize draw will take place on Wednesday 31st October.