Light Up the Sky – the 2019 Pattaya Fireworks Festival 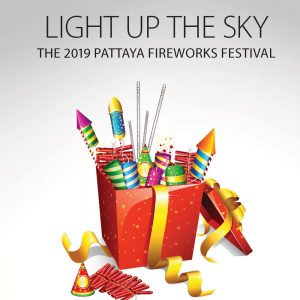 This month is the annual Pattaya International Firework Festival which will take place between the 24-25 May.

This is a spectacular event that sees participants coming from around the globe. The fireworks are launched largely from rafts out at sea in front of Central Festival and which can obviously be best seen from Pattaya Beach Road although many of the major hotels also take part.

WHAT TO EXPECT
Although naturally, the main focus is on the fireworks themselves, there are a number of other events that take place to make the event even more exciting. These include various concerts that include live international and Thai music, parades and displays of traditional Thai dancing along with more contemporary dance. Events get underway around 5pm and continue well into the evening which obviously creates a little bit of a carnival atmosphere.

Generally, the performers are of a very high standard and often view coming to the celebration as something of an honour. Massive effort if put into scheduling the acts and setting up the stages with one of the main ones being found at Bali Hai although there are several others at various points along Beach Road.

As mentioned, the event takes place over 2 days with the firework display on the first day being slightly shorter and it often viewed as a rehearsal for the main event – although that doesn’t mean that it is not well worth seeing! On the second day, the main day of competition, the display lasts for around 2 hours although, with breaks, the fireworks are only being fired for around 45 minutes with prizes being awarded to the most impressive.

As with many of the main events in the city, Pattaya Beach Road will be closed to traffic with stalls and food stands taking the place of cars.

Of course, the usual Thai favourites such as Somtam, Pad Thai and Satay will be available with a small selection of international food for those feeling a little less adventurous. Close by, venues such as the Sportsman are on hand if you require something more substantial.

THE HISTORY
The festival is to celebrate the life, reign and birthday of the late King Bhumibol Adulyadej (his birthday was actually in December). The gala started back in 2009 and was originally intended to run for 2 years but such was its success, despite a lack of funding, it has continued ever since. The only year that was missed was the year after the revered King’s death, 2017, when it was cancelled as a mark of respect.

The View Point on Pratamnak Hill along with the Thai Naval Radio Station are great places to watch from a distance whilst all the hotels with sea views are again an option. The recently restored beach area and the northern end of Pattaya Beach is also an option but is likely to be busy. Some of the dive schools also put on boats so you can watch the whole event from the water.

FINALLY!
If you are unfamiliar with these types of festivals, it is well worth going
along just to the see the spectacle for yourself. The celebration has tended
to increase in size each year with the displays getting increasing spectacular, especially with several teams coming from China along with the Philippines and Japan. So, don’t forget to take your camera, embrace the festival experience and enjoy the fireworks light up the sky over Pattaya bay.