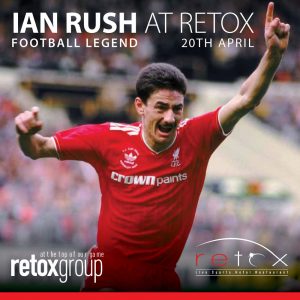 Ian Rush is Liverpool’s all-time goalscorer with 346 goals and you can meet him exclusively at Retox Game On.

During his time with the Merseyside club, he scored 346 goals making him their all-time leading scorer. His time at Anfield was only broken by a spell with Juventus in Italy for whom he signed for a record £3.2 million, rejoining Liverpool for £2.7 million a year later.

During his playing career, Rush won 5 League Championships, 3 FA Cups, 5 League Cups and a European Cup. In 1984 he was also the European Golden Boot winner, a year that also saw him pick up the PFA Player of the Year Award, a year after winning the PFA Young Player of the Year trophy. He will always be regarded as a ‘great’ and ‘legend’, terms that are all too frequently used in football these days. Rush helped develop Robbie Fowler who himself went on to break many goalscoring records on Merseyside.

Rush was Welsh international and made 73 appearances, scoring 28 goals for his country over a 16 year period. After leaving finally Liverpool he had short playing spells with Leeds United, Newcastle United, Sheffield United and Wrexham. He had a period as manager of Chester City in 2004 to 2005 as well as working in the media as a pundit. He still appears in the Masters 5-a-side tournaments and is a hugely popular figure at these games.

Rush is still heavily associated with Liverpool Football Club and can frequently be seen at games alongside his former strike partner, Kenny Dalglish. He’s also a Soccer Schools Ambassador for the club and works closely on the commercial side, forging strong links and partnerships with global brands.

TICKETS AVAILABLE AT ALL RETOX VENUES & VIA RETOX2U DELIVERY7