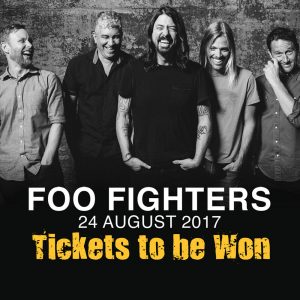 The Foo Fighters need no real introduction; they have been at the top of their game as one of the world’s most famous American rock bands since the early 90’s.

Founded by Nirvana’s drummer Dave Grohl in 1994 they have had huge achievements over the years, including winning 4 Grammy awards for Best Album and have sold over 30 million albums worldwide.

They have recently released a new single entitled ‘Run’ proving they are still pushing the boundaries with their unique, intense sound and headlining the likes of Glastonbury Festival in the UK on Saturday night, they are smashing their way to further successes this year.

After their memorable performance in Thailand in 1996, 21 years later promoters Jamm & Miracle Management are proud to announce their follow up show in Bangkok sponsored by Amazing Thailand.

One of the hottest music concerts in Bangkok in this year, tickets are selling fast, so don’t miss this chance to see one of the world’s leading rock bands this year sponsored by Chang Music Connection & Amazing Thailand.

The Pattaya Guide team have got our hands on the hottest tickets in Thailand, if not Asia, and we’re giving them away!

We have 12 tickets worth 60,000 baht, which we’ll give away in pairs. Six lucky winners can take their mate, or girlfriend to Challenger Hall 2 at Impact Arena, near Don Muang Airport, on Thursday 24th August for one of the hottest music concerts in Bangkok this year. It’s gonna be a night to remember.

HOW TO ENTER
We have picked six popular venues around town that makes it easier you, our readers to enter our ticket giveaway. In three simple steps…

1. Spend 500 baht or more on food and drink in one visit at any one of the following venues: Hemingways – Jomtien, Punch & Judy – Thepprasit Soi 8, iRovers – LK Metro, Robin’s Nest – Soi Diana, Sportsman – Soi 13 and any of the Retox Bars – Soi Lengkee – So2i Honey – Siam Country Club.

2. Write your name and email in capitals so it’s clear to read.

3. Put the receipt in the Pattaya Guide Foo Fighters Ticket Giveaway box. The draw will take place on Monday 21st August at each venue.

Winners will be announced on our Facebook page and contacted via email.

If you don’t fancy your chances at winning, or there’s a group of you that want to see this awesome band live in Bangkok, some tickets are still available from 4,500 Thai Baht and can be ordered online at the following ticket sites www.go.eventpop.me/foofightersliveinbkk or www.thaiticketmajor.com

Remember to leave extra early as the traffic can be notoriously bad getting into area with bumper to bumper traffic.

You can also visit our web page www.pattaya.guide/foofighters